I did include ClustrMaps now to track the places the visitors come from. You can click the link at the bottom to be informed...

On the other hand, the FroNet clone ("LOGIG") is getting better and better. It will now send an email in case of any problem - although problems are a thing hard to test, so I can only assume it will work. The test cases and the test code did their job, though.

My Fronius Software clone is reliably running and showing the PV data in the internet, as 'live' as the DHW system's data. Also, it shows the calculated solar maximal energy by a rough approximation (no scattered light, etc).

On the other hand, the DHW system did only twice need the oil heating to heat up water as back-up since april, and 7 times since the beginning of march. Not bad. The oil burner is switches off nearly all the time.

I just calculated that we have an overall coverage of 77% over the last year (March-February) for the hot water system! YEAH!

Partly, it's due to an extraordinary warm winter, but even in the last winter the coverage was more than 70%. Of course, for more reliable values we still need several years. But the design seems to work.

Unfortunately, the German political leaders are running around like headless hens, after the UN climate report was pre-published. Strange suggestions are offered, soon to be pushed back into the drawer.

Strange world. Example: instead of having to pay for the total amount of pollution caused, it is suggested we have to pay for the possibility to cause pollution. Taxes on the car, based on the petrol used by that kind of car - but not depending on how much we actually drive! So someone with a small car who drives much pays much less than us with our (family!) van that we drive as little as possible, polluting the environment less....

Do we really deserve these political leaders?

Again back on-topic: The warm winter really was a hit. A lot of days without oil heating - wood and sun! Much more than last year.

The positive side of climate change, or just luck?

Google Earth has new pictures of Konstanz - my place can be seen at Google Link File (KMZ file).
Have fun!
To get back on-topic: still only 2 times of external heating since april 14th! Yet the mist comes back and we might start to need some oil again at the start of next week. The weather news say that the mist disappears "during noon", but that's a bit late due to my panel orientation.

The August was very cold, so for one day we needed to switch the heating on (Aug 15th). But so far, this was the first day since Apr. 29th (and the 8th since the 1-year birthday, March 24th) that we needed some oil!
Yesterday, we needed to change a leaking gas separation valve ("Gasabscheider") at the water reservoir, so I had to switch the system off since sunday (cooling it off to about 60°). No problem, we have 85° again.
I added a "Graphs" menu in the PV system which compares our system to others. This comparison is easy, thanks to Solarenergie-Förderverein Deutschland e.V. (SFV)

Since a few days, we don't need any oil any more to heat up the water. It was about time!
The winter was long, cold and with only little sun. Let's hope it's gone.
On a clear day, the tank heats up about 30 °C, which is enough for several days.

YESSIR! We had some days of sun. Enough to get about 60°, which led us over yesterday's and today's mist (no news). Still the lower row is shaded by the neighbour's house, but every day it becomes better.
An image interpretation: On you can see how the circulation starts when the valve is opened at 09:00. When the collectors are hot enough so that the warm water from the reservoir does not rise any more (starting 13:00), the circulation stops and the blue and orange lines (flow from and to the tank) get back to normal temperature.
Fortunately, there's no large heat loss due to this. The anti-gravity-circulation valves ('Gravitationsbremsen') apparently do not close very good. 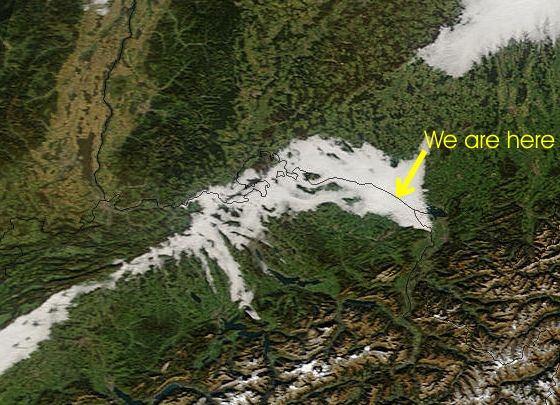 This image shows very good that a lot of regions have blue sky and sunshine, but we here are under a more or less constant cover of low clouds ("high mist": "Hochnebel" in German). Since november 7th. Sigh. The influence of the lake of constance, but it has not been that bad for years! Only very few days had enough sun to show that the system's orientation is not THAT bad, although the lower row of panels is shaded after 11 o'clock.